Showing posts from January, 2020
Show All

- January 28, 2020
Inspired by my colleague, I have spent some time putting together a Spring Boot 2 starting project. Audience: Developers who would like to have a structured Spring Boot 2 project to compare. Link to the repository: spring-boot-example Dependencies: Spring Actuator for management lombok for easy annotations swagger and swagger-ui for docs Spring devtools for dev Spring security for signup and login postgresql for database jpa for database access jjwt for jwt in java h2 for database using in test security test for testing security stuffs Spring Boot Starter Test for testing boot application What in the examples: Simple sign up and login. Simple Rest API demostration. Auto database migration with Flyway. Auto documentation generation with Swagger2 Build with gradle. Running locally with Docker + docker-compose. Store data in Postgresql database. Init database with startup sql-script. Some unit test for the Rest API. Reference: My colleague proje
Post a comment
Read more

Today Learning: Packing lightly to save our environment

- January 08, 2020
I am checking for a new trip with my favorite airline - Finnair. And I have notice that if everyone takes a small action as packing less 1 kilogram of baggage can save a huge amount of fuel. Therefore, the small action can also save our environment. "If possible, take direct and short routes, combine different forms of transit (for example, a train journey with a flight) and fly with airlines that use modern and fuel-efficient aircraft fleet. You can also directly influence the fuel consumption by packing lightly. If every Finnair passenger would have travelled with one kilogram less baggage in 2018, the fuel savings would cover 20 flights from Helsinki to Tokyo." Reference: https://www.finnair.com/fi/gb/pushforchange - ninjahoahong
Post a comment
Read more

Games I have played: Sugar Blast 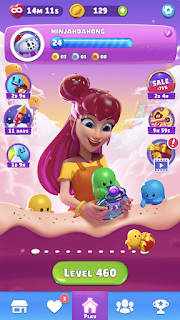 Recently, I have played a game made by Rovio Entertaiment, the Angry Bird maker, called Sugar Blast. Following you can see the main scene of the game. Personally, I really like the art style of the game especially those cute mini figures. I have not found a game very interesting with challenges such as the "choco challange" show in the following pictures. The challenges usually last several days and the top 3 will get gold, silver, and bronze medals. The player will get match with players of similar levels so that the race is more exciting. Beside the challenges, there is also event such as caching rainbow candies or stars which will get the player different in game rewards. In addition, a player can create a team or join another team created by other player. Below is a video on a demo play. In the demo, I have played a level using special skills such as the magic guy to re-arrange the layout and the "powers-up" to bomb a large area. There is
Post a comment
Read more
More posts